What sets Bijan apart from other performers, is his ability to personally play all the instruments used in his arrangements.  The national and international tour beginning in 1990 brought Bijan to sold-out audiences throughout the world in venues such as Royal Albert Hall, Toronto Performing Art Centre, Segerstrom Center for the Arts, Queen Elizabeth Theatre, Kodak Theatre and many more.  On July 3, 1994 after thirty four years of playing the violin, Bijan Mortazavi became the first Iranian performer to display his indisputable talent at the Greek Theatre which included a 53- piece orchestra in front of a sold out crowd of 6,400.One of the pieces played during this concert entitled “Epic” had been written by him when he was eleven years old. On stage Bijan shared with his audience his boyhood dream of one day performing this particular piece on a grand scale.  Thus presenting his national music to people from all around the world. His dream came true.

What is unique about Mortazavi’s accomplishments is his immense success outside of Iran, where he is much admired among international music circles. Indeed, Mortazavi defines much of his work in the genre of light classical, and a bridge between the Eastern and Western musical traditions. Many of his songs have been performed in different languages in several countries. The quality and variety of sound he produces from the instrument is remarkable. Mr. Mortazavi is universally recognized as one of Iranian/American’s finest composers and violinists.

On November 25th of 2009, Bijan received his Fellowship (Ph.D.) from the Southampton Solent University in Great Britain. Ever since receiving his Ph.D., Bijan has conducted many master level courses in various countries. He has been tasked with the development of contemporary Middle Eastern music in an academic form in the United Kingdom and other western countries. 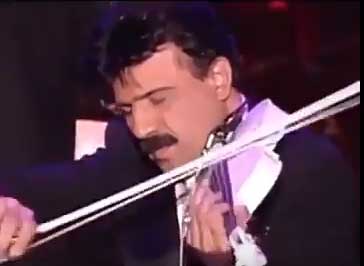